Near Locks for the Tournament

-        Making a case: Davidson has no bad losses, a top 15 offensive efficiency (KenPom), and no hiccups in conference play so far.

-        Case for the couch: none right now, but the A10 is deeper than most people realize. In fact, it’s one of the leagues that I’m predicting a bid stealer to come from. If Davidson wins the games they should, they should give themselves a good case for an at-large even if they don’t end up winning the conference tournament.

-        Making a case: St. Bonaventure has looked like one of the better teams in the A10, and were my pick to win the A10 relatively handily. However, their COVID pause really threw a wrench in the program. They haven’t been as good since the COVID pause and aren’t currently worthy of at-large discussion. If they can return to form in conference play, look out for them as a bid stealer or a “last 4 in” team.

-        Case for the couch: The Bonnies will only get one shot at Davidson, the only tournament team left on their schedule. Would a win there be enough? Probably not.

-        Making a case: The Flyers have beaten some top tier opponents this year. They’ve taken down the likes of Kansas, Miami, Belmont, Virginia Tech, and St. Bonaventure. This team has proven its ability to beat really good teams

-        Case for the couch: For every good win, the Flyers have an equally as surprising loss. Losses against UMass Lowell, Mississippi, SMU, Austin Peay, and Lipscomb are probably way too much to overcome in a bid for an NCAA Tournament appearance. But don’t be shocked to see the Flyers compete for a conference championship.

-        Making a case: VCU is essentially the Dayton Flyers without the high tier wins and the bad losses. They’re consistent, but a middle of the pack team. A win over Davidson this week really would have helped their case, but they left a lot to be desired after leading with 2 minutes left and losing the game.

-        Case for the couch: VCU doesn’t have any wins that will pop off the page like other bubble teams in their situation. There isn’t really precedence for the committee to take a team without good wins, even if there are no bad losses.

-        Making a case: St. Louis has played an extremely deep schedule with teams like Memphis, UAB, Boise St., Belmont, Auburn, and Iona. Close losses in those game are likely the difference between off the bubble and in the discussion. They have opportunities coming up that could put them back in the discussion

-        Case for the couch: Not enough high quality wins. Only 4 wins in the top 3 quadrants is not a recipe for a tournament team.

-        Making a case: Rhode Island doesn’t have the resume right now, but still have games against Dayton (x2), Davidson, VCU, and St. Bonaventure. If they were to win those games, they’d need at least consideration

-        Case for the couch: Tough to stay in any conversation when your best current win is against St. Joseph’s

Posted by Sam Hadfield at 4:29 PM No comments:

Locks for the Tournament

- Outlook: Continue to play well for high seeding, not many quality win opportunities, but plenty of ‘speed bump’ games that could lower their seed

-        Making a case: Memphis ranks #43 in the KenPom NCSOS, and #33 in the BPI SOS, they have looked like a tournament team in their big wins @ VA Tech and against Alabama

-        Case for the couch: Memphis was a favorite team in the preseason, expected to be a 2nd weekend tournament team. They have lost multiple games where they didn’t show up to play (@ Georgia, @ Tulane, @ East Carolina, vs Iowa St.) They lack consistency and a point guard that can run their offense

-        Making a case: The win against Miami is increasing in value over the past few weeks with the recent scorching hot run from the ‘Canes, but UCF lacks a signature second win against a tournament team.

-        Case for the couch: It’s tough to lose by 24 to the #218 NET ranked team, even if it is on the road, and still be considered come the end of the year. Furthermore, the Knights lack major opportunities for Q1/Q2 wins outside of 2 remaining matchups with Houston

-        Making a case: The 20-point win against Illinois is a great addition to their resume, but they, much like UCF, don’t have significant victories to pair with it

-        Case for the couch: Cincinnati’s remaining schedule only has 1 Q1 opportunity: at home against Houston

Posted by Sam Hadfield at 4:18 PM No comments: 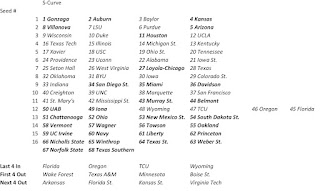 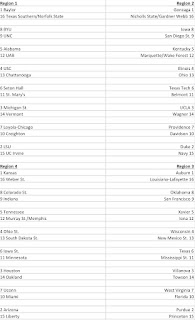 With conference play underway and 40% of games being postponed/canceled in the last few weeks, it's been difficult to track and make a bracket, but we've got one we feel really good about! See where your favorite teams land here and compare at Bracket Matrix. 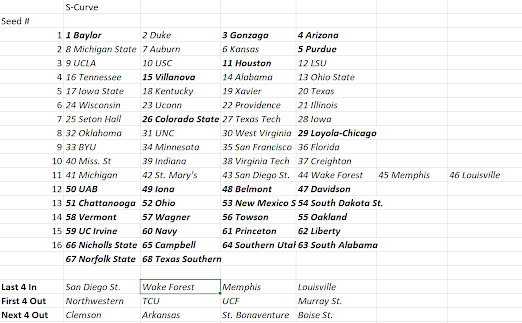 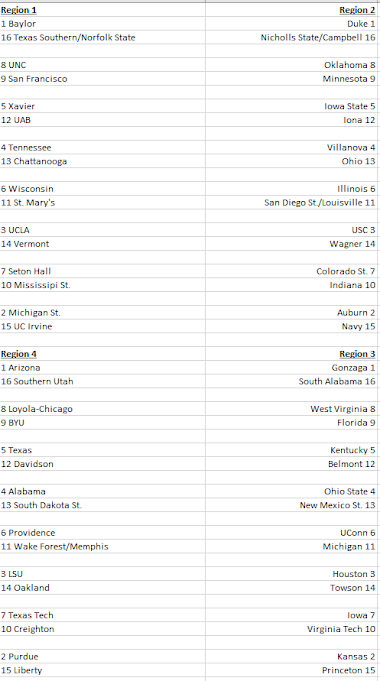 Posted by Sam Hadfield at 9:19 AM No comments:

This will be the final bracket if Houston is able to beat Cincinnati! 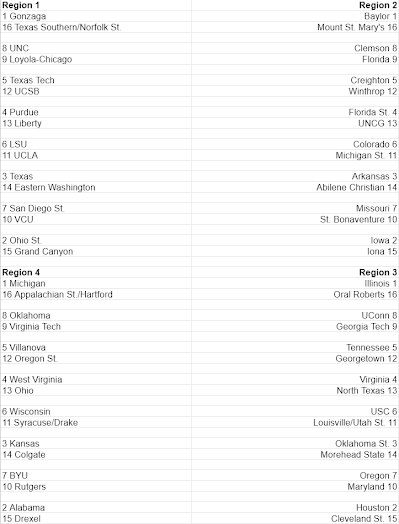 Posted by Sam Hadfield at 12:08 PM No comments:

One more post to come after one last scrub and after the Cincinnati-Houston game goes final! 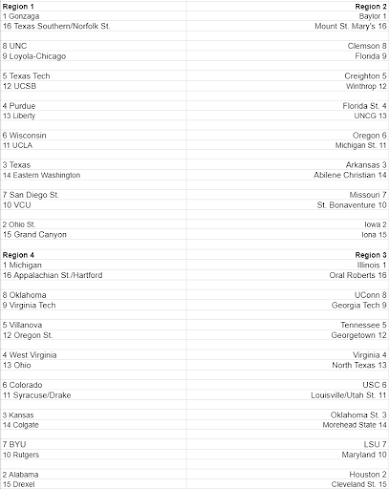 Posted by Sam Hadfield at 9:17 AM No comments: